In June 2013, the early arrival of monsoon caused heavy rainfall for 6 days, leading to breaching of one glacial lake and possibly a landslide dam on the Mandakini river. This lead to the huge transport of sediment to downstream areas causing toe erosion along the river bank of Mandakini destabilizing the slopes along the river channel leading to landslides and making most of them chronic. This has reduced the sediment carrying capacity of the rivers and decreased the stability of slopes making the whole region more vulnerable to natural hazards than ever before.

Researchers who are devotedly studying such ‘extreme’ events in the Himalayas have concluded that events of this magnitude and smaller have taken place for past one millennium or so.  Many of such events are caused by the Indian summer monsoon during the months of May to October. The westerly and south westerly winds to the west and East Asian monsoon to the east of Himalaya add to the intensity of Indian summer monsoon.

Our field site which encompasses Kedarnath to Srinagar falls into the high intensity zone of rainfall and lies in the Central Seismic gap. However, in this study the focus is on the understanding of the effect of rainfall in causing slope instability leading to landslides and eventually sediment transport in the deep valleys and gorges in this part of the Himalaya. 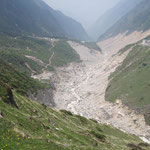 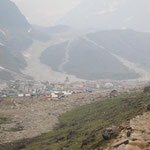 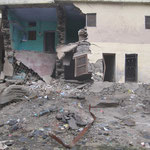 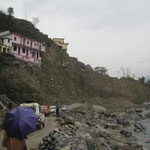 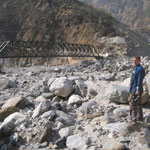 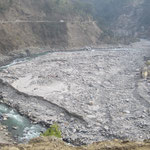 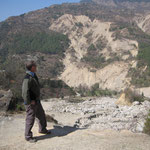 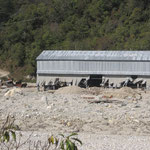 As an initial step, two field trips were conducted during February and June, 2014. The first trip was aimed to survey the disaster affected areas along the Mandakini river and its tributaries and to qualitatively estimate the factors and level of destruction. Some interviews with the local people were conducted to ascertain the depth of sediment deposition along the river course. The areas surveyed were Gaurikund to Srinagar, Madhmaheshwar valley, Kali valley.  A short commentary published in Hydrological Processes (below) describes our understanding of the disaster and the underlying hazards.

In the following field trip in June, both large and medium natural and anthropogenic landslides were measured along the Mandakini river and its tributaries from Kedarnath to Srinagar. The worst flood affected town of Kedarnath was also surveyed during the second trip. Attributes of around 65 landslides such as GPS coordinates, landslide boundary coordinates and distance of landslides from river were measured using precise GPS and total station. This may help at later stages of the project for the landslide modeling of the region.

At present, the project is in its initial stages. As a first step, spatial downscaling of TRMM rainfall is undertaken to obtain a high resolution, upto 1 Km, spatially varying rainfall product for our study area.